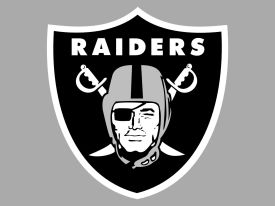 If Hard Knocks has shown us one thing, it’s that the Raiders are serious about changing their losing mentality, and trying to introduce leaders into what is a relatively young roster. Whilst Antonio Brown will never be a leader he does bring an extreme amount of talent, and if he can get his head in the right place (no helmet pun intended) he will be a major addition. Questions still surround the toughness of Derek Carr, he clearly has the arm talent, but can he stay in the pocket and take a hit when he needs to. New GM Mike Mayock drafted Clelin Ferrell considerably higher than most pundits had him mainly based upon his potential to be a leader on that defence. The pass rush still looks very underwhelming, so it may be up to fellow rookie Jonathan Abram to provide a few safety blitzes. The line-backing core is very experienced, and I think the Raiders may shock a few teams when the new season gets underway.

Derek Carr has scored only one rushing touchdown in his 78 career games, so we’ll move swiftly along.

The third of the 1st round selections which we haven’t yet mentioned is Alabama running-back Josh Jacobs, who will provide Carr with the best pair of hands he’s ever had coming out of the backfield. Unfortunately you don’t get a full workload as a back under Nick Saban, but even so, Jacobs was able to score 14 times in 15 starts last year, so I like the look of Jacobs when it comes to anytime touchdown scorer selections. How much times he loses to Doug Martin is yet too been seen, and given the ‘muscle hamster’ has scored 32 times in 84 career games, he isn’t one to sleep on.

AB had his best scoring season in 2018/19, finding the end-zone 15 times, and with a career scoring rate of 61.1% he could excel in this Jon Gruden/Greg Olson offence. Not much has been mentioned about the other addition at wide-out, which is Tyrell Williams joining from the Chargers, who was one of Phillip River’s favourite deep-threats whilst in San Diego/Los Angeles, scoring 17 times in 48 starts. So with all the attention on AB, Williams could easily have a decent scoring season. Hunter Renfrow is pencilled in as the slot receiver and given his solid career at Clemson it will be interesting to see his effectiveness at the next level.

Now Tight-end is anyone’s guess. Darren Waller is currently set to be the starter, but given his lack of playing time there is no real stats to go off, and behind Waller you have a few guys that have mainly been backups throughout their career. Therefore I won’t be touching the Raiders tight-ends until at least the mid-point of the season.