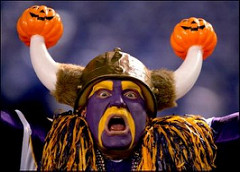 Who am I? In short, just another crazy NFL fan, a little like the man pictured above, if not a little younger and less purple. However, the long version begins about 24 years ago, at the tender age of 8………….. It was a school night so I got sent to bed around 9pm, as with my adult life I have never been great at going to sleep early, however on this night it wasn’t much of a problem, and I was sound asleep with minutes, the problem was, because I fell asleep so early that I woke up again around 1am (that’s GMT as I live in England). So I decided to put my TV on, now I’m talking 24 years ago, so the TV in my room was only 10 inches wide, and about 40 foot deep, an roughly the same weight as a small elephant! I ended up flicking to channel 4, and there it was, giant men running at the speed of light, crashing and bashing into each other with absolutely no remorse for their bodies, that’s right it was the NFL. If my memory serves me correct (and that’s a big if) it was a game between the Seahawks and Raiders, when the Seahawks were still part of the AFC. Now at 8 years old I had no clue what this sport was, or in fact what the hell they were trying to achieve, but I couldn’t take my eyes off it. From that day on, I was hooked. So the next day I was little tired going to school, as I’d had about 4 hours sleep, but I was determined to find out more about this strange sport.

The issue was that back in ‘those days’ there was no internet, or at least not in our house, so it wasn’t quite as simple as googling it. Instead I had to go to our local library, that’s right, an actual library with real books and everything! Now the library wasn’t exactly full of books about the NFL, but it did have one that explained the basic rules surrounding the NFL, and information about its history. Although once I had read that I was out of information. Therefore all I could do was set an alarm each Monday night so I could get up and watch every Monday night game. Which sounds easy, but my mother soon grew suspicious as to why I was so tired every Tuesday morning. So I had to get smart, I placed a rolled up towel along the bottom of bedroom door to stop the light shining through into the hall-way, and placed blue-tac over the stand-by button so that it didn’t look like my TV had been on all night.

Skipping forward a few years, I was now 14, and had been watching the NFL for 6 years in a fairly limited capacity as it was only 1 to 2 games televised a week. However, around this time my family purchased Sky Sports, which to my delight was showing 3 games of NFL per week plus the playoffs. This was also around the same time in my life that I became interested in gambling, yes I know 14 is young, but you’ll see what I mean as the story goes on. When I say gambling I was simply charging my friends and family £1 per team at the start of the NFL, with the winner taking all £30, the clever part of this was, that before I offered my family the teams, I had already picked out the 3/4 teams that I thought stood the best chance of winning that season. Now this method was pretty successful, and I won 3 out of 4 years. Not a bad little earner at 14!

Moving on another few years, I am now 16/17 and my obsession with the NFL has grown further, to the point where I am recording every game on video tape (that’s right, pre-dvd) and re-watching each game so I can log my own statistics. This is part of the story where you get to know that I’m a closet excel and maths geek, which when it comes to betting comes in very handy. At this point I have now plucked up the courage to enter a bookies and start placing bets for real, although the bookies where I live weren’t exactly a posh affair. They pretty much smelt like urine, fags and a severe lack of deodorant, but I was still excited to place my first bets. Now over the next few seasons I quickly discovered that making money from my family with the odds stacked in my favour, was a hell of a lot easier than trying to take money from the bookies, who will always have the odds stacked in theirs.

After a few losing seasons I soon began to grow tired of losing money, although it wasn’t huge sums it was still enough when you consider I was only at college. I was confused as I thought I knew everything there was to know about the NFL, which in some ways I did. The problem was, that I knew absolutely nothing about gambling. I mean, yes I was good at maths, but I had no idea what the bookies were trying to achieve when they set the money-line odds, spread and totals etc. So my next task was to find out everything in regards to gambling/sports betting that I could. My learning process stills continues to this very day, where I now own over a 100 betting related books.

The first valuable lesson was that accumulators don’t work! Back then I would place a 4 or 5 team accumulator each Sunday, which as I have now learnt is very foolish. Looking at my results from previous seasons I did notice that on most weeks I was getting 3/4 selections correct, which meant that had I placed all my selections as singles, I would have made decent profit across the season. These selections were mainly based upon my gut instincts and from what I had seen the previous week, and contained no mathematical basis. So my next procedure was to begin creating various algorithms that would show me when there is significant ‘value’ in a team or a points total etc. These methods and algorithms were in-fact relatively successful, regularly hitting a Return On Investment (R.O.I) of between 3-10%, which most bettors will tell you isn’t too shabby in a sport where the margins are so fine.

However, at that point in time I simply didn’t have access to a bankroll big enough to make the hours of research and data analysis worthwhile, which is when I turned my attention to golf – This is point where you learn that I also run a extremely successful and award winning golf betting service called PGA Profit, which has been in operation since 2018 producing some tremendous results that can be found on the website, or at Smart Betting Club.

This success then afforded me the time to go back to my previous NFL methods with a far greater bankroll in toe! So, in both the 2019/20 and 2020/21 seasons I had all of my selections monitored again by Pete at SBC producing a terrific record of 91-58-3 and a return on investment of 17%, far exceeding the standard of results being produced by some of the best ‘cappers’ in the world. Which is why I took the decisions in 2022 to turn Touchdown Profit into a premium service, charging a small fee for access to my selections.

Just a little side note, I do not profess to be a professional writer, or anything close to it. So please accept my advanced apology for any incorrect grammar, spelling, punctuation, etc.